I need a break from empanadas. For real. It was fiestas patrias. Which means eating empanadas is a national obligation. Then we went to Pomaire and they served us pan con pebre y más empanadas. Then I went to Valparaíso (post forthcoming) and I ate an empanada as a snack, then a giant empanada for dinner. The next day for lunch we started with- ¿adivina qué?- pan con pebre, y una empanada de mariscos (seafood). Then I came home and saw that we had sopaipillas. And I though to myself, “Please, don’t let that be dinner. I can’t eat fried bread right now.” It turns out that sopaipillas weren’t dinner. You know what was? A mushroom empanada.

I can’t. I just can’t anymore. I think I need a salad. And some water.

Anyways.  This post is just a general summary of thoughts I’ve been jotting down in my blog notebook periodically. Before it gets too much bigger, I’d better publish what I’ve got.

On Thursdays every week I volunteer at a community center for kids. I get there around 1 o’ clock to set the table and eat lunch and take tea with the staff. Then it’s off to get ready for the rest of the day. This includes preparing craft materials, cleaning up from lunch, cleaning the house and classrooms, and supervising whatever kids have arrived early. Around 3:30 or 4 most of the kids have gotten there and we start working on homework. At about 5 or 5:30, we serve onces. The kids get leche asada (milk heated up in a huge pot until it’s a little brown) and fresh bread, prepared with margarine or queso crema (not cream cheese!). At this time I usually have some bread and my second mug of tea. The kids get free play time until about 6:30 or so, when they have talleres (workshops). I’m currently leading a taller de teatro (theater) with the littlest kids, between ages 5 to 8. This involves playing various games, which I hope will instill in them assorted skills and values, such as leadership, self-esteem, focus, confidence, creativity, and teamwork. At 7:30 they leave to go home, and by 7:45 I’m usually on my way back to the metro for a solid hour-long commute home.

I love my volunteer work. It keeps my hand in theater a little bit, at least on the education side of things, which I have adored since I was an intern at my theater academy in high school. It is awesome to see how the same games I played when I was their age entertain and educate them as much as they did for me so long ago. And in another language, no less! The kids are precious and precocious. I have angels and I have bosses, but I love them all. For every difficult moment in which I threaten to summon the supervising tía, I get five that make me laugh and smile- for instance, one of my more mischievous girls was painting the other day, and I asked her what color she was using, because one of the other gringa tías could’t remember the color in Spanish. Instead, mi chiquita gave us the color in English- something we’d worked on together weeks before! I love hearing them gossip, listening to the prayers they offer before they take onces, seeing the very grown-up faces they make sometimes, jugar pelota, y mucho más.

This work has its challenges. On Thursdays, there are 6 volunteers in total- three full-time, and three weekly visitors. It’s necessary to carve out a role for yourself and stick to it. I’m really only there for a short amount of time- about 6 hours or so every week for a few months- so I wonder how much of a difference I’ll actually make. I want to be remembered, and remembered well. But will they remember me? How can I make sure that I make an impact? Is it okay if I don’t? How can I be present to the kids and the staff every time I’m there? I try to pray through these questions, and trust that at the end of the semester, I’ll have the answer.

As I’ve discussed before, I have a younger host sister. This allows me to continue being the oldest child and a big sister, which is a large part of my identity. I have learned that being a big sister to a sister is very different from being a big sister to brothers. My youngest brother and my host sister are the same age- and sometimes I really can’t believe it. I love my sister- we are actually quite alike, and had I been an only child, we would be even more similar. This means that I finally have someone to whom I can impart what I learned as a teenager! Most of these lessons are like this: your parents are right. You will thank them later. You will not win this fight- and it’s a good thing. You don’t need to grow up so fast! Being a kid and being mature are not mutually exclusive things. But how do you do that without seeming old and boring and too much like a mom? Sisters are awesome. But brothers are easier.

Thought Catalog, one of the best new things I’ve found on the Internet recently, just published this post about learning another language. And it is great. Learning a new language- and really learning it, which means you have to be able to speak it and understand it as spoken by native speakers- is not easy. My key to success has been talking. You have to talk in that language, all the time. You have to listen to it and read it. Avoid English. Writing this post is not good for my immersion, because I’m spending more than an hour thinking and writing almost entirely in English. Fight the desire to let it be easy! Speak in Spanish (or whatever language) with your study abroad classmates. When you need something, ask for it. If you live with a host family, just talk! It’s how you’ll get to know them and how they’ll get to know you.

When things get really tough, just remember: Disney/Pixar movies are a universal language.

We’re having really weird spring weather here. Usually it’s consistently sunny and warm here. The temperature varies widely over the course of a day. I woke up the other morning and it was 2 degree Celsius: about 35 degrees Fahrenheit. But the high for the day was going to be 22 grados- 73 degrees Fahrenheit! How the heck am I supposed to dress for that? (“con todo el closet,” says my host mom.) How do the Chileans wear the warm clothes they don in the morning all day long? Do they just suffer on the 85-degree metro at the end of the day?

It’s been cold and rainy for three days. I’ll talk more about that when I write about my trip to Valparaíso later. But here’s what it looks like out my window on a nice day: 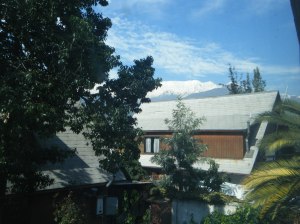 Blue and snowy and clear and gorgeous.

Where did the mountains go?!

You can imagine how finding your way around Santiago would be difficult today when people usually try to give you directions by orienting you towards the mountains.

Little victory recently: I bought some new clothes and thought that maybe besides being really blonde and having light eyes, I could kind of pass for Chilean in these outfits. The other day I was in my class that is about half gringos. One of the gringas, who always speaks exclusively English with her classmates, turned around and asked me for a pen- IN CASTELLANO. I think she thought I was Chilean. Ha HA!

The metro can be a drag, but it can also be really lovely. I see Chilean doppelgangers of my friends and family. The other day I caught the glance of a little girl, with curly blonde hair and big blue eyes like me. I know she was Chilean. And she looked at me as if she was trying to picture herself at my age in the future. I saw a little guy, probably no more than 3 years old, making eyes at a couple giggling twentysomethings. It was adorable. What took the cake, though, was the newborn baby sleeping in los brazos de su mamá, all bundled up in pink and stirring every so slightly, with those perfect little fingers and teensy studs in her ears. I couldn’t stop staring. It was beautiful.

Look out for a new post on Valparaíso soon! Thanks for reading.