Oh heyyyy. I’m sticking with the biweekly post commitment, friends. I didn’t have any brilliant ideas or things to write about this time around. I thought about writing about baking, and I realized that I haven’t baked anything since I came back to school. I thought about writing about Chile-sickness, but I’ve dealt with that basically every single time I post. So I’ll give you a break this time. Then I remembered that I actually made New Year’s resolutions, and since a month of the new year has already passed (crazy talk), I decided that this could be a good opportunity to recap how those resolutions/possibilities/intentions are going.

So. I said I’d try Meatless Mondays. I don’t think I’ve done it even one Monday yet. Granted, I don’t eat meat at every single meal. If there’s fish, I’ll get fish. Eh. I’ll give it another shot. I also thought that I’d try to eat fewer carbs on the days where I don’t have half-marathon training runs. But what you eat the day or two before a longer run, not just the day of, really matters, and that includes good carbs. Also, I have fallen in love with the panini maker in the dining hall and can make a perfect chicken caprese AND an egg and cheese sandwich. So there’s that.

Speaking of the half-marathon…we’re seven weeks out from race day and training is going pretty well. I hit six miles this week and actually felt really good. My legs were kind of confused as to what had just happened, but I ran at a pace I was very happy with, and I was not miserably sore the next day. 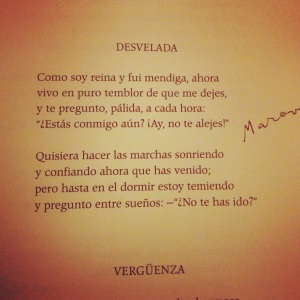 A new favorite from Gabriela Mistral.

Another resolution I had was to be in bed around 1 AM and get up at 8:30 every weekday. I mostly get up around 8:30, but bedtime at 1 is a little challenging. But I’m working on it. The nights that I turn the lights out before 2 are much more numerous than they have been in recent years, so I consider that an improvement. One thing I’ve been doing more often- which I thought I’d do all last semester but basically never happened- is reading a little bit before I go to sleep. Right now I’m working through an anthology of Gabriela Mistral’s poetry and essays. Mistral is one of my favorite poets. She wrote beautifully in Spanish on a wide variety of topics: Chile, faith, motherhood, womanhood, and education, among others. Her poetry often reads like a prayer, and that’s a nice thing to have right before bed.

I’ve also been journaling almost every single night. Taking five to ten minutes just to write down my thoughts on the day is so very helpful. It’s calming, and it lets me work out whatever happened that day and let go before the next day arrives. At the end of every entry I write down five things I’m thankful for, and five things I’d like to pray for. I strongly recommend doing this if you think you’re a busy person without time for much reflection- even if you don’t want to write a full journal entry, putting down five moments of gratitude and five moments of prayer can do wonders to deepen your faith, and the gratitude in particular can easily brighten your perspective on a rough day. 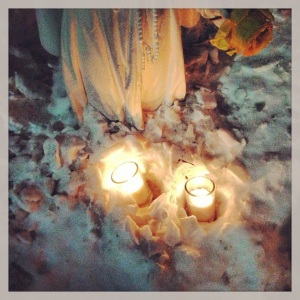 Candles at the feet of St. Bernadette at our Grotto.

One resolution that I really need to work on is getting over to the Grotto, a very special place of prayer on campus. My goal is to get there five times per week- and I think I’ve been there less than ten times total over the whole semester thus far. It’s been very, very cold. A poor excuse, I know, but that’s really it. You can’t spend any time there because it’s so cold it’s almost unsafe to be outside. I always stop by the Grotto after an outdoor run, but it’s been beyond my cold tolerance to run outside. Hopefully the weather will finally warm up, and I’ll get down there more often. Or, I will refocus this resolution and just go downstairs to our dorm’s chapel. There really aren’t any good excuses for this one.

My shining resolution of the month, besides half-marathon training, was writing and sending at least one card or note to someone every week. I sent several during my first week back at school, and I’ve been good at coming up with new people to send them to each week. It helps that my youngest brother got me these adorable blank greeting cards that have a pretty dessert on the front and the recipe on the back. Even in the age of Facebook and Instagram, and the slow sad death of the post office, stationery and cards are still excellent gift ideas!

I think that’s all for now! Valentine’s Day is approaching. There will be sweet things to eat. And you will see pictures.

How are your resolutions going? Have you given up or are you still going strong? Do you have any suggestions as to how you keep pushing along month after month of the year?