My Hotel Kitchen: Taking It for a Spin

I write this as I listen to the dogs in the room across from mine bark up a storm, and I’m reaching for a sip of wine (that I opened with my keys and a shoe after the screw part of the corkscrew broke off in the cork. Resourceful.). “The Blind Side,” one of my favorites, is on TV. My plans for the rest of the night include a home manicure and a face mask. I hope that your night is as chill or as wild as you’d like it to be.

Last week I wrote about my new cooking adventures. I got off to a solid, if basic, start after a very fun grocery trip. It was fun because I could spend as much time as I wanted wandering the aisles and browsing all of the delicious offerings- quiche! cupcakes! tarts! wine! quinoa! crab legs! Gah. The freedom was thrilling.

My very own grocery cart. Plenty of essentials, and a few treats.

I had done a little cooking before my big grocery trip. Over the course of cooking eggs and grilled sandwiches, I realized that I will have to load up my pans with nonstick spray and keep the heat low in order to avoid burning. The smell of burning eggs is one of my least favorite smells, and burnt eggs are not fun to clean off a pan. I do not like burnt food, period, so knowing that it will take some time for me to learn how to use my cooking tools has influenced the recipes I’m starting out with.

In preparation for the work week, I cooked:

A Southwestern quinoa blend: it came in a pouch, and I simmered it for a while on the stove. Easy. What wasn’t easy was controlling the heat (remember, it’s an electric stove) and keeping it from boiling over or dying down completely. But it worked out.

Brown rice: I cooked rice in a pot, not a rice cooker! Rice is easy, guys. Add a little oil or butter to the pot, and it will help reduce the stickiness. Just keep an eye on it. When most of the water has steamed off, it’s close to done. As you learn how to cook it, add or reduce water depending on how fluffy or dry you like it.

Sautéed shrimp: I bought a package of peeled, tail-off, frozen shrimp. I wanted the tails and peels off because I didn’t feel like dealing with that, but I still wanted them raw so I could control how done they were. To me, a lot of precooked shrimp is chewy and kind of dry. It was a gamble cooking the shrimp in those sticky pans, but I figured if I didn’t want to eat everything cooked in the microwave, I had to give it a shot.

First, you thaw the shrimp. Get it completely thawed, but don’t let it sit out and get warm. That’s just not good policy with seafood (or anything you don’t usually eat raw). Rinse the shrimp and drain it in a colander. I then tossed it in some lemon garlic vinaigrette, which I got from this recipe. I intended to make that salad, and maybe eventually I will if I can find a small quantity of plain quinoa at a reasonable price. But it turns out the vinaigrette is a perfect “marinade” for sautéed shrimp!

After that, I sprayed the pan with olive oil non-stick spray, and in went the shrimp on medium heat. Do not leave shrimp alone when you sauté them! In a hot enough pan, shrimp cook up really quickly. Cook them on each side, just until opaque. They’ll be pink, but if they’re solid white and look very shriveled up, they’re probably over done. How do you know if they’re done? Once they look opaque, you’re probably safe tasting one, even if it’s a little underdone.

These shrimp were super tasty. If you keep an eye on the pan, shrimp are a cinch to cook and are an easy way to get more seafood into your diet.

This week, I ate them with brown rice and avocado. Simple and satisfying. 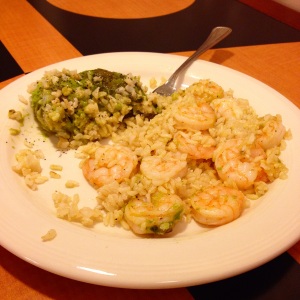 It’s not the prettiest. But if you’ve been around this blog long enough, you know I’m not the queen of aesthetics.

That was the extent of my real cooking this week. The other meal that I made was a quinoa burrito bowl. I put that together with the quinoa I made, rotisserie chicken from the store, shredded cheese, and more avocado.

Okay, I ate the burrito bowl on a plate. Same idea.

People love Chipotle’s burrito bowls, but really, you can make them at home with very basic combinations of simple ingredients. I’m picturing future versions with more vegetables, black beans, maybe some Greek yogurt in lieu of sour cream- you get the idea.

We went out for lunch twice this week. One lunch was a nice Italian place, and the other was a chicken-fried steak at the Amarillo stockyards. The stockyards are where they auction off cattle, and the cafe there is where the ranchers eat lunch and breakfast. That chicken-fried steak was hearty and delicious, but man oh man, was my appetite shot for a while. My dinner that night? Avocado toast.

This was all I needed. Simple can be satisfying!

Other meals included a few prepared items I picked up at the store. It’s tempting just to buy six or seven dinners from the deli and just make sandwiches for lunch. I have to cook, though, so I know exactly what I’m eating, and so I learn how to make food that I enjoy- all the time. Nevertheless, I like having a few meals on hand that I can just stick in the microwave and chow down.

One of the challenges of shopping for myself is figuring out just how much to buy. If I’m going to buy a rotisserie chicken, then I need to put that chicken in my lunches in order to use it up by the end of the week. I don’t need to cook an entire cup of rice- that yields three cups, and you know what? That’s a LOT of rice for one person.

I think I did a little better this week. There was still ice cream left over, so I resisted the temptation to buy a new flavor…or to pick up some cupcakes or cookies from the bakery. I didn’t buy more salad greens, even though I might need more by the middle of the week. It’s about balance, and learning how much I really need, and what I can allow for wants.

Next week, I’ll be cooking:

Pan-seared salmon (just because I don’t have an oven doesn’t mean I won’t eat my fish!)

Again, if you have any recipe suggestions, or if there’s something you’d like to see, please let me know in the comments!

Filed under My Hotel Kitchen