My Hotel Kitchen: Waste Not

Want to feel fancy and grown-up while you’re cooking or eating dinner? Go find a bossa nova playlist. You’ll feel all chic and mature. You’ll want to learn Portuguese. You’ll sip your $5 wine a little bit slower, and maybe you’ll take a taste of your canned pasta sauce as you heat it up on your two-burner electric stove. It doesn’t matter that you’re in yoga pants and a ratty t-shirt and you have Queen Helene’s Mint Julep mask smeared all over your face. It doesn’t matter that you’re trying to finish up pasta that you cooked almost two weeks ago (pasta doesn’t spoil, right?). Bossa nova. It instantly elevates whatever you’re doing.

So here’s the deal guys. I had huge and elaborate dreams of turning My Hotel Kitchen into a regular feature on the blog. Every week I’d be coming to you with one or two brand new recipes. And that…has not been the case. Yeah, it’s only been about a month. This could still get off the ground, right? Maybe. But I’ve eaten mostly burrito bowls and garlic shrimp with peas and feta for the past two weeks, on the nights that I haven’t eaten with coworkers before a meeting, or decided to celebrate the weekend with sushi or quiche from the grocery store.

When I make a batch of brown rice, or a pound of pasta, it lasts me more than a week. So I’m always looking for ways to use that up, using what I already have prepared. Hence, burrito bowls and shrimp. I’ve said for about three weeks now that I was going to make shrimp-stuffed avocado. You know what that is? Shrimp mixed in with avocado and then put back into the avocado rind. You can’t even eat the rind! So what’s the point of that? It looks pretty. Eh. I have better things to do. Like eat.

All of this is to say: I don’t have tons of new content for you. I’m trying to work on it. A big reason for that is because I do not want to waste food. The first two weeks here, I bought a whole rotisserie chicken, thinking that I could finish it off before it went bad or before I went to get more groceries. I would be able to eat it all- if I ate nothing but chicken for five days. Meh. So I switched to precooked, frozen grilled chicken strips. That might sound icky to some of you who don’t enjoy frozen food, but it’s less icky than the feeling I get when I throw most of a whole chicken into the garbage.

The past week has consisted of trying to get rid of what I have. I’ve done a pretty good job of it. I think I can eat one more burrito bowl, to finish off my black beans, before I get totally sick of the dish. The rest of the brown rice will be going towards my first attempt at fried rice– something you can throw together really easily with an egg, precooked rice, frozen veggies, and your choice of protein.

And you’ll get two new dishes next week! One of these is this pasta dish– modified to account for the fact that the vegetables will probably be already cooked or from frozen. The next is tilapia. I bought frozen fillets (frozen seems to be the word of the week, doesn’t it?), and I’m anxious to see how they hold up to the same pan-searing method I used with the salmon. Tilapia is one of my favorite fish. My dad makes a super delicate (super delicate? Really?) baked version, and I’ll see if maybe I can replicate that in my beloved stainless steel pans, on the electric stove.

For now, I leave you with a few food photos. The first is of some great summer squash I bought at the farmers market and sautéed with some olive oil, butter, and seasonings (I used the lemon pepper Mrs. Dash blend, with salt and pepper).

Pick a squash that isn’t too soft; otherwise it won’t hold up to sautéing or to grilling, 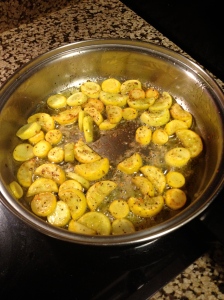 Sauté until golden brown on the edges. Nice and easy!

Summer squash is one of the few vegetables I will eat without being helped by cheese or carbs. So this was a win.

The next dish I have for you is…pasta. With jarred sauce. Listen, poor students and young professionals have been sustained by pasta and jarred tomato sauce for generations. It is one of the few meals that you can make that approximates the taste of home without all of the work.

The key to getting a really good pasta meal out of jarred sauce is to zhuzh it up. I was going to attempt to spell “zhuzh” phonetically, so you would know how to pronounce it, and then I realized that that’s basically the phonetic spelling. Zhuzh. You know, like when you zhuzh gel into your hair? Pronounced like that.

I could also choose another word but I don’t feel like redoing that whole paragraph.

Anyways. Zhuzhing up (we’re sticking with it now!) your jarred tomato sauce. Get some fresh herbs. Basil is particularly good with tomato sauce. Maybe you like a little extra garlic- get some chopped or minced garlic and throw it in there. You probably won’t need more salt. It came out of a jar, after all. Prepackaged foods usually have a lot of sodium already, so beware!

You can probably tell that I chose to zhuzh up my sauce with cheese. Fresh mozzarella, to be specific. I had it left over from the panzanella I made a couple of weeks ago, and it added that gooey, melty awesomeness that I just love. It also helped bulk up the dish, since I only had a handful of pasta left. Cheese + chicken + a little pasta was more than enough.

Another tip here? Get the sauce good and hot. Please don’t settle for lukewarm or tepid foods. Part of the secret of recreating a solid homemade meal, even if you’re on your own or on a budget, is to eat it like you would at home. For me, that means it needs to be nice and hot, and I have to be sitting down at a real table.

We gain nothing from eating in a rush, standing up or in our cars. We also don’t get anything from eating on the couch in front of the TV, mindlessly inhaling a fast food burger (although I totally did that just last week). Sit down. Maybe put on some bossa nova (see? I brought it back around!), turn the TV down, or pull out a book. But most importantly: take. your. time.

Coming soon: reminiscing about Chile (yet again, I know I know okay?) and a bilingual post!

Filed under My Hotel Kitchen

Tagged as cooking, cooking for one, eating, leftovers, pasta, travel